Binder wasn’t properly building pods and launches weren’t working. It was decided that:

We notice that launches are not happening as expected. Cluster utilization is very low, suggesting that pods aren’t being created.

This is the utilization behavior seen: 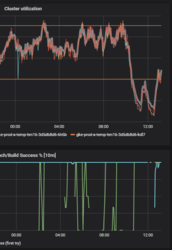 Behavior is once again going wrong. Launches taking forever to load. We note a lot of networky-looking problems in the logs.

Deleted several evicted pods. Pods are often evicted because of low resources available and kubelet evicts in order to free up resources for more important services.

Confirm that networking seems to be find between production pods.

Note that the CPU utilization of the BinderHub pod is at 100%. If we restart Binder pod, the new one gradually increases CPU utilization until it hits 100%, then problems begin.

This explains the short-term fixes of deleting the binder pod from before.

We realize that the jupyterlab-demo repository has been updated and has a lot of traffic. This seems to be causing strange behavior because it is still building.

jupyterlab-demo repository is banned, and behavior subsequently returns to normal.

Post-mortem suggests this is the problem:

These are only sample subheadings. Every action item should have a GitHub issue (even a small skeleton of one) attached to it, so these do not get forgotten.